Learn more about Community HealthChoices with our CHC Toolkit! 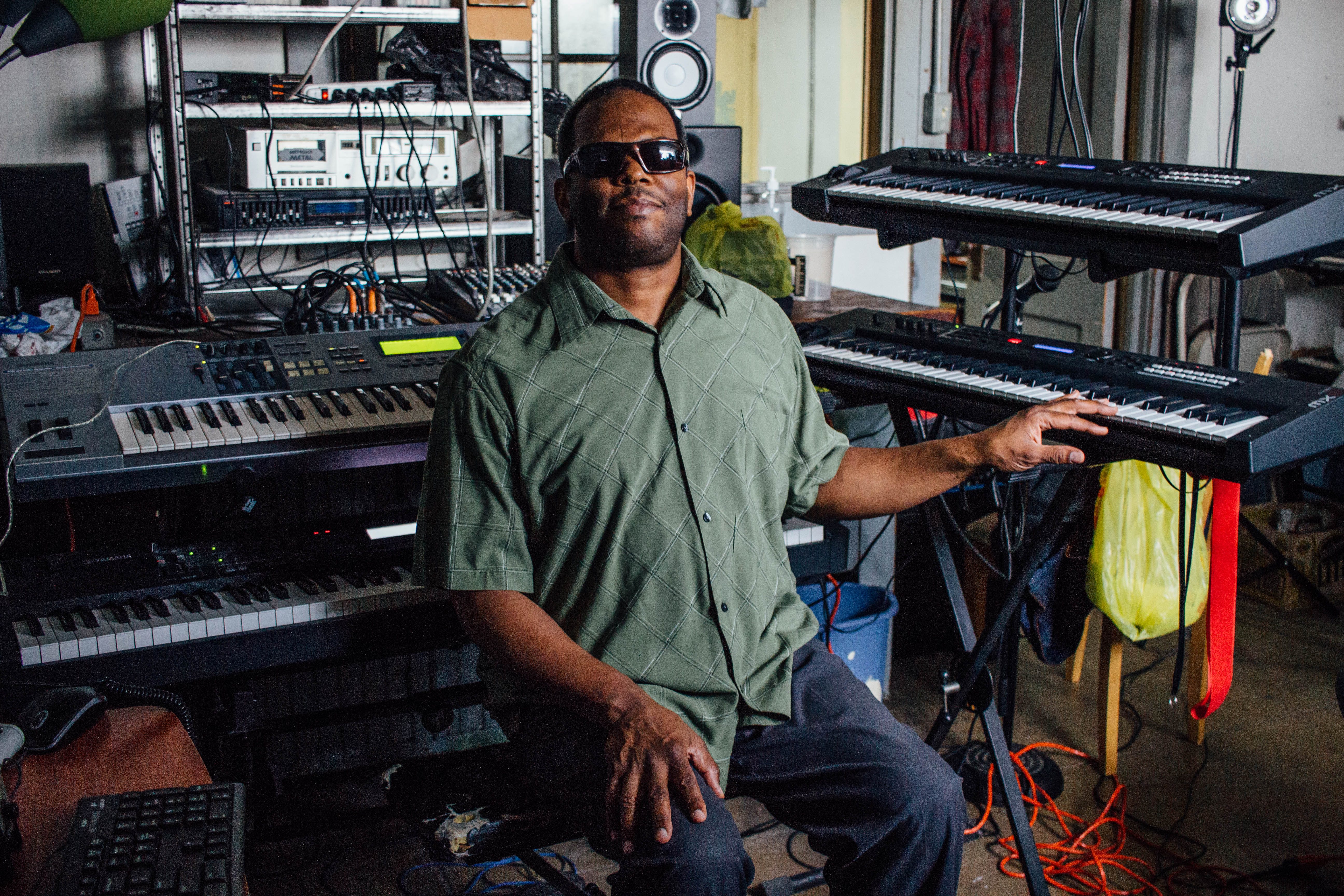 “Music is one of life’s gifts. It is toy, tool, and tonic. You can hear it and feel it—there is something for everyone.” – Tom Smith

Growing up in Philadelphia, Tom Smith’s family had a piano that, for the most part, was treated like just another piece of furniture, adorned with the lamp, a jigsaw puzzle, postcards, and other knickknacks. One night, when Tom was still in preschool, his mother banged out a few bars of “Rhapsody in Blue.” Tom was amazed that the piano could make that kind of sound. Little did he know that many years later, after a career in computers and technology, he would make the leap to become a full-time musician.

Over the years, Tom dabbled with the French horn and the trumpet, but his true love remained the piano. He has been inspired by such musicians as Herbie Hancock, Kenny Baron, and Marcus Roberts – “a blind man, who I say with great pride, is one of the most exciting jazz piano players breathing,” Tom explains. 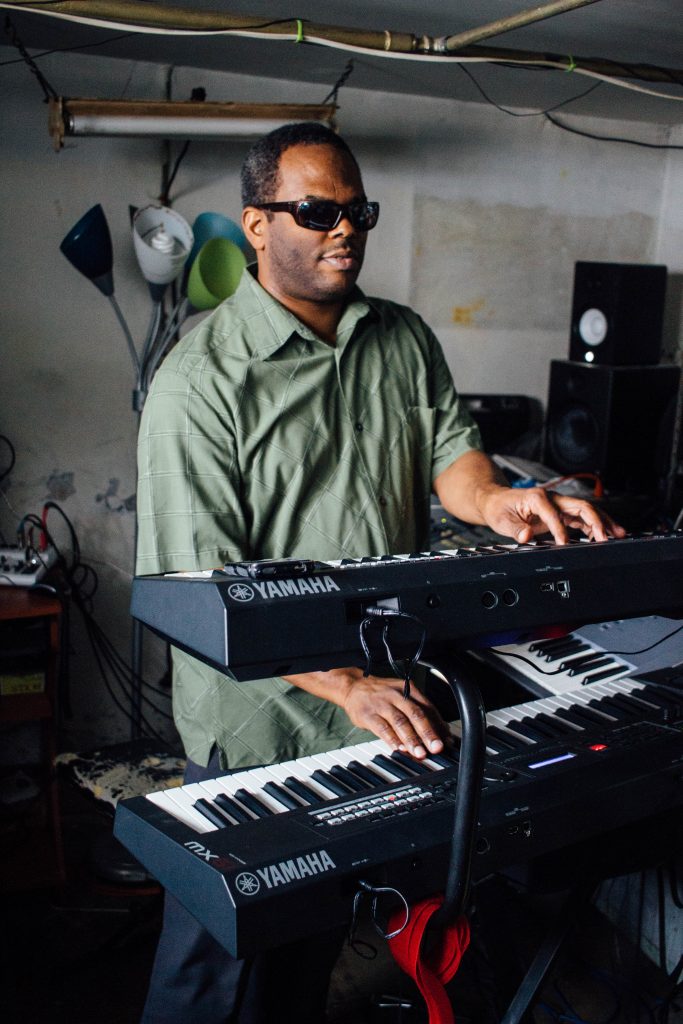 Tom uses a variety of keyboards, each with it’s own purpose.

Tom is also blind, although he asserts that his penchant for music is inconsequential with regards to his blindness; he would have loved music regardless. Born with congenital glaucoma, and undergoing eight surgeries before the age of six, Tom’s sight vacillated back and forth between being able to see objects and colors, and seeing only darkness. But at seven years old, Tom was running down the hall and ran head-first into the corner of a wall. The progress of the surgeries was reversed and slowly over the course of a few years, he lost his vision completely. “Being blind is a huge inconvenience, but it is not the end of the world. As society becomes more aware of people who are blind and what it means to be blind, the burden is lightened some,” he says.

Tom works full-time as a free-lance musician. He is a keyboardist, composer, and producer. Earlier this year, he experienced total equipment failure. His hardware was broken, his software was corrupted and outdated; his career was brought to a grinding halt. “I was embarrassed, frustrated, angry… I could not professionally compete with the other sighted producers, or for that matter, the other blind producers. An acquaintance suggested I contact PATF, and it was like ‘rubbing the lamp!’” Tom took out a loan from us for a new computer and the specialized software he would need to record: JAWS (a speech reader) and Cake Talking (a program that bridges JAWS with the recording software on his computer).

With a professional home studio, all that’s needed is work ethic, of which Tom has plenty. “Everything takes time and you get out of it what you put into it. It takes hundreds of hours of practice to become a bad musician; it takes thousands of hours to become an okay musician; and it takes tens of thousands of hours to become a good musician. But, with this computer and all the specialized software, the playing field has been leveled with respect to recording art – we are all working from a mind’s eye view.”

Listen to Tom improvising on the spot when we visited to photograph him:

Scroll down to see some interesting examples of the technology Tom uses on a daily basis: 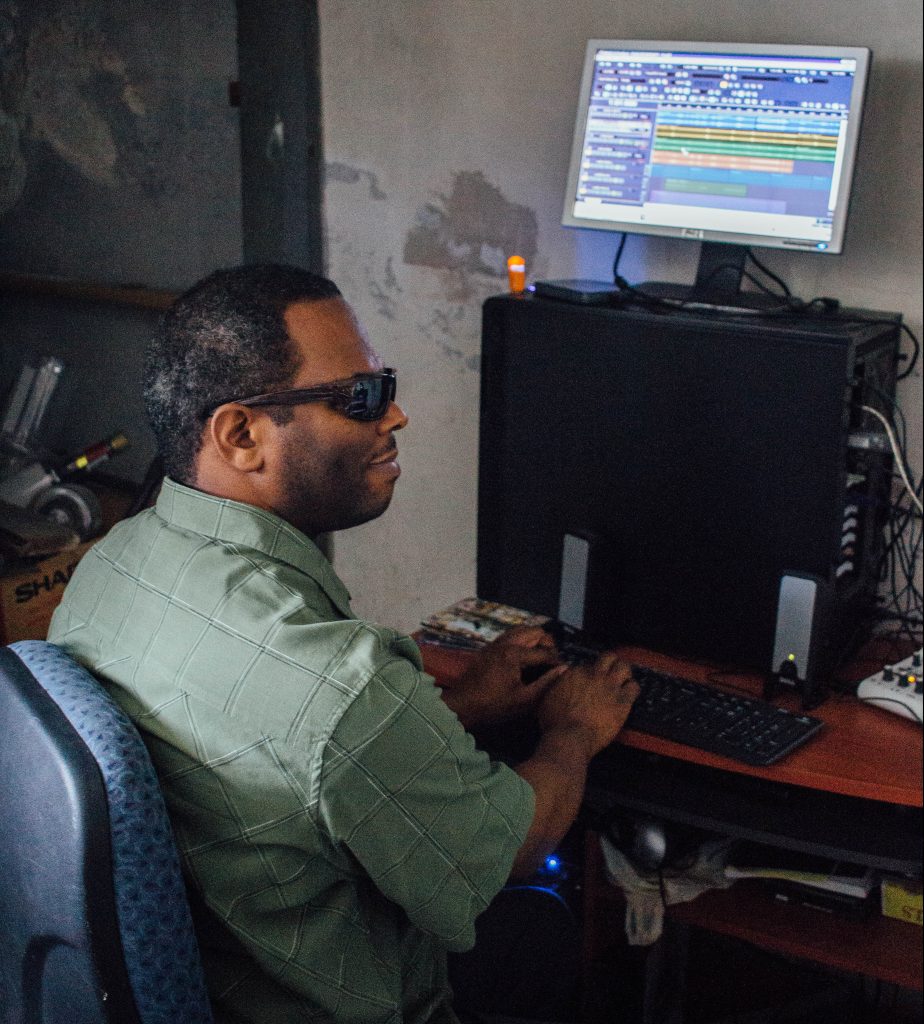 Tom uses JAWS (a screen reader) and Cake Talking (a program that bridges JAWS with recording software) to compose, record and produce music. 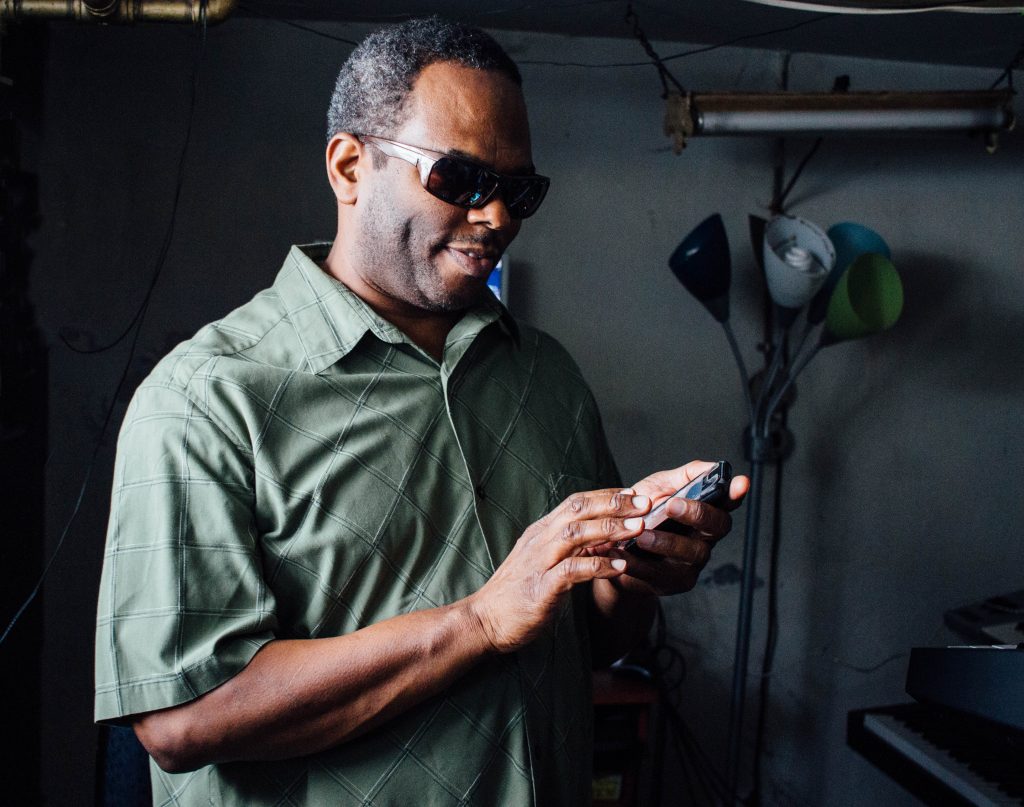 Tom uses apps on his smartphone for everything from identifying bill denominations to determining which lights, if any, are turned on. 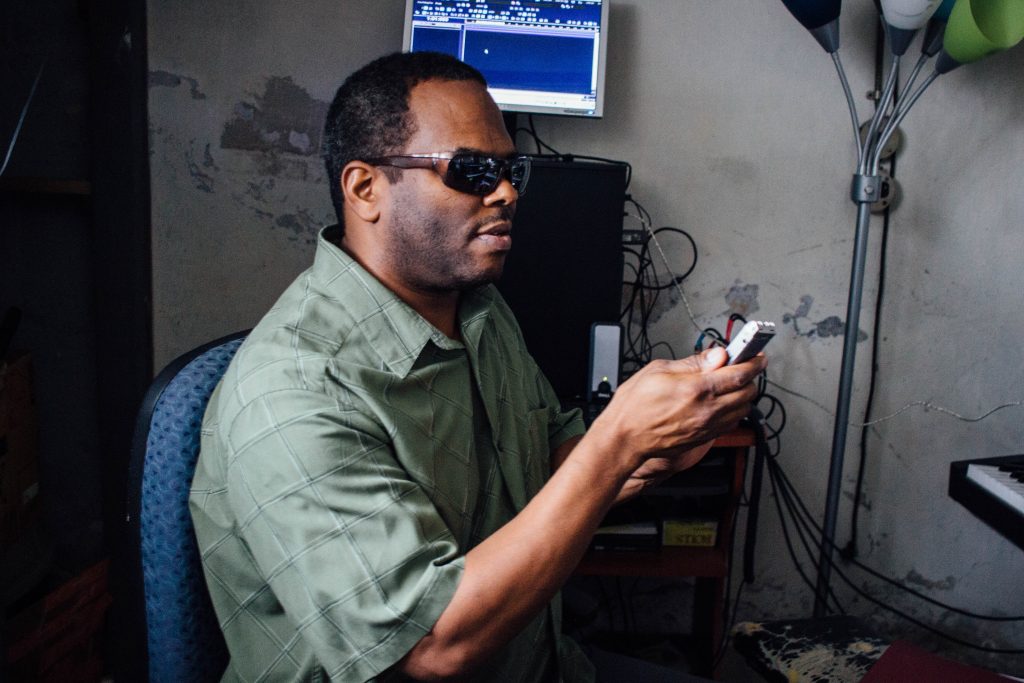 Tom uses a hand held digital recorder for voice memos and to record music on the fly. This device is particularly useful thanks to its built-in capability to speak aloud the buttons that are pushed, narrating back to Tom what he is doing. 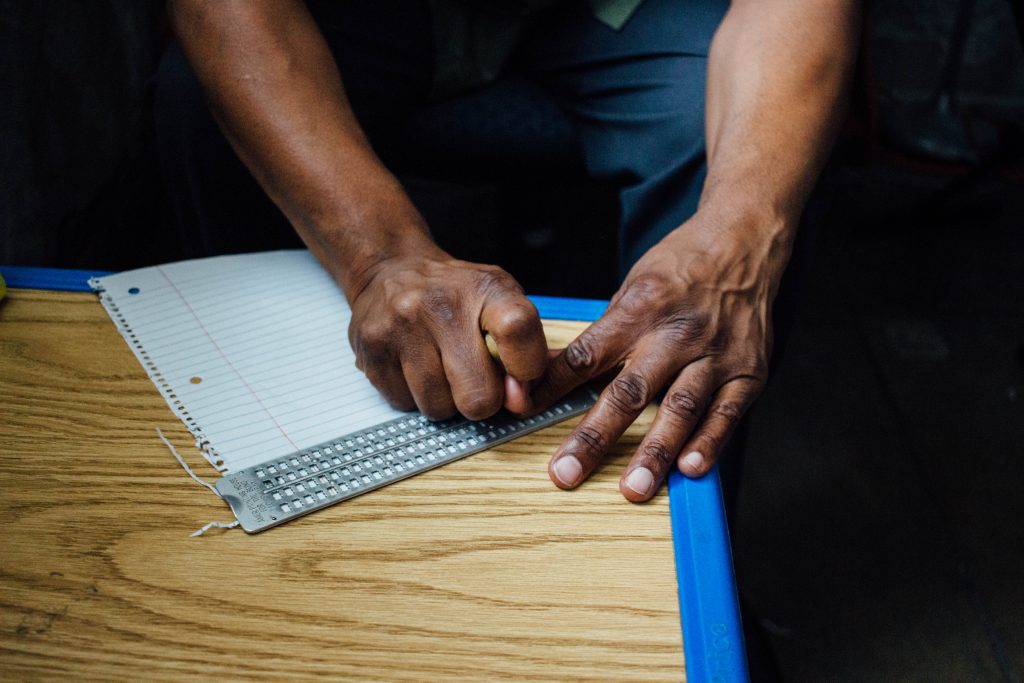 Tom uses a braille slate and stylus to record notes for himself while he’s working.