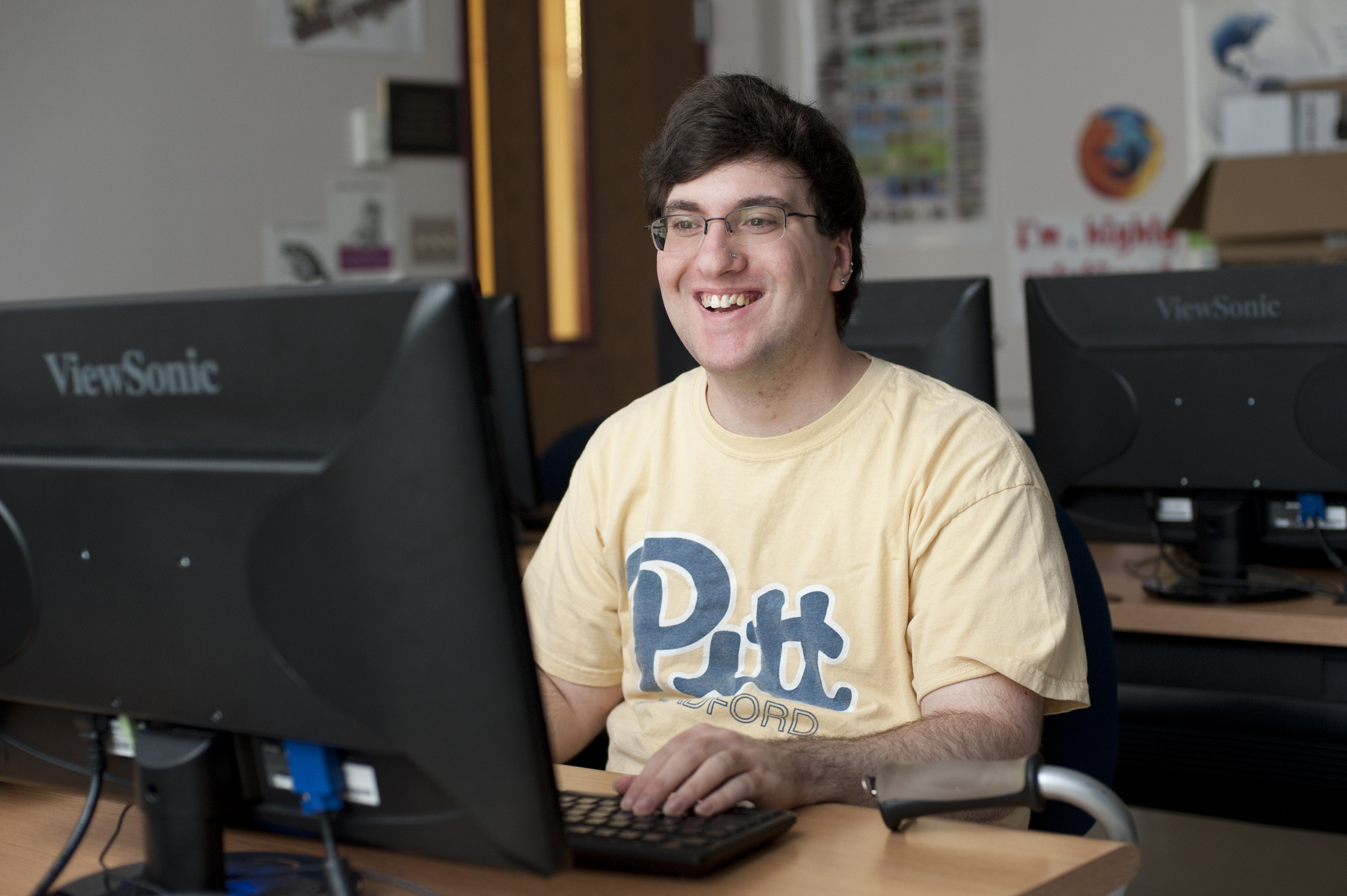 Tyler is working hard to finish his undergraduate degree. As a student at the University of Pittsburgh at Bradford, Tyler is majoring in Computer Information Systems and Technology, with a minor in Digital Graphic Design. But like many undergrads, his career goals after college aren’t directly related to his major. Tyler wants to work in student affairs on a college campus. Even now as an undergrad, Tyler could be described as a leader as much as he is a student. Former freshman orientation leader, current president of the campus Pride Alliance, student representative on the LGBTQ Faculty and Staff Advisory Board, and LGBTQ+* student representative on the campus President’s Diversity Committee are just a few of the titles Tyler has held so far in his college career.

“After being an orientation leader to help freshman get acquainted with each other and our campus, I realized I really enjoy working with students, especially those who are just starting their college career. I want ALL students to feel welcome here, regardless of their race, sexual orientation, gender identity or expression, religion, disability, etc.” says Tyler. 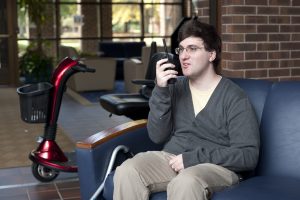 Tyler spends some of his free time dabbling in amateur radio, experimenting and communicating with people across the world.

While Tyler is committed to this goal, he worries about the reality of working with a chronic illness. Tyler has a rare neuromuscular/autoimmune disease called Myasthenia Gravis (MG), among other health issues. MG causes muscle weakness in voluntary muscles, including those used to see, walk, talk, breathe, chew, and swallow. As a student, Tyler sometimes has to miss class due to fatigue, exhaustion, and sometimes pain. Specific symptoms vary from person to person, and for Tyler, MG makes walking longer distances difficult. Even on a small campus like Pitt-Bradford, Tyler can’t walk from one end to the other. 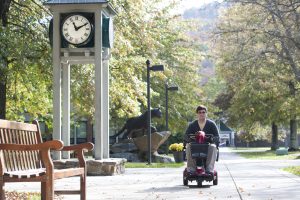 Tyler uses his scooter to travel between classes across campus.

This is why Tyler credits his new scooter with the opportunity to finish his degree. After his 15-year-old scooter’s brakes and various parts were failing, he started an online fundraiser to raise the money to buy a brand new Golden Companion II Full Size 3-Wheel Scooter, which would be cheaper than replacing parts on his old one. In July, with classes fast approaching and only half the money raised, Tyler and his family applied for a PATF loan to cover the rest of the cost. This scooter disassembles easily for transport and will do well in the snow this winter with its high ground clearance.

Tyler also uses a cane for support while walking, a shower bench and grab bars for stability in the bathroom, a ramp to make it easier to enter and exit his home, and automatic doors on campus building entrances for hassle-free entry. Overall, Tyler has an extremely positive attitude toward his illnesses, adopting the outlook, “If I can’t change them, I might as well accept them and keep going.” 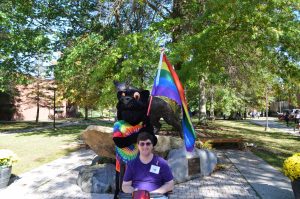 Tyler poses with the Pitt Bradford Panther at Coming Out for Equality 2017, an event he put on as president of the campus Pride Alliance.

Tyler explains, “Assistive technology has allowed me to continue to pursue my dream of a college degree and my goal of helping other students, as it helps me get to and from classes, and get to those meetings to plan events and give my input on diversity on our campus. Just this fall we hosted two big events: the Pride Alliance’s National Coming Out Day celebration, Coming Out for Equality, and a memorial service for Transgender Day of Remembrance to honor and remember transgender lives lost due to transphobic violence and hatred. Both were well attended and prompted many compliments from faculty, staff, and students.

“One student was so inspired by a speaker at Coming Out for Equality that they came out that day. The impact we must have had on that student means a lot to me. I always say that even if we only reach one person at an event, all the hard work was worth it.”

*LGBTQ+ stands for Lesbian, Gay, Bisexual, Transgender, and Queer plus any other sexual orientation and gender identity that isn’t covered in the “LGBTQ” acronym. Learn more about LGBTQ+ terminology.