Social Isolation and Kids with Autism: How Technology Can Help

I am a parent of a six-year-old with autism, and I was just starting to (finally) feel like I had a semi-handle on public school/kindergarten, autism, and celiac disease. I was seeing the light at the end of the anxiety tunnel, having a sort of feeling like, “My kid is gonna be okay… I think. Yeah, she’s gonna be a fine.” Then – BOOM – this COVID-19 quarantine thing happened. 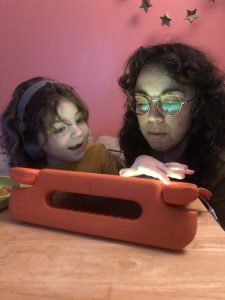 Penny uses an iPad for speech and occupational therapy sessions.

The level of fear that hit me is indescribable. She’s made so much progress, both socially and academically. Both socially and academically! A huge deal for our family. She was getting soooo close to being able to do more. Things that I’d been jealous of when I’d hear others in my parent groups casually complain about in their own neurotypical kids. Things that involved articulating wants and needs, and being able to make valid arguments as to why the child felt they shouldn’t have to finish eating chicken nuggets before they watch an episode of Dino Dana. Or making too many versions of a fart joke on their own (not memorization), which personally I thought were well thought out and pretty funny.

Meanwhile, my Penny struggled to describe what her favorite food was or which of two drinks she wanted to drink. We have to provide visuals to successfully make it through one of these conversations.

So here we are, her 6th birthday party coming up, March 15th, and she was able to tell me in Penny fashion what she wanted. It was pretty awesome; I can’t NOT share. She wanted a pterodactyl cake with the number six on it and she asked to wear the RED Power Ranger costume. She then listed, by name specifically, the friends she wanted to invite because, and I quote, “They’re gonna love it I think.”

For any parent of a child who was diagnosed with autism and a serious speech delay, you can see why this is pretty amazing.

Then COVID-19 started and social distancing became a thing. Social. Distancing. I had visions of all of her progress being taken away, regressing, and was immediately bombarded with memories of crying out of frustration because she couldn’t tell me what she needed or wanted. Figuring out which book she wanted me to read to her felt next to impossible unless the options were physically in front of her. And I remembered running back and forth between her bed and our book shelf, bringing book after book, describing different books’ covers or storylines to her, desperately hoping to the autism GODS that I’d magically find the one she wanted, only to watch her get more and more frustrated until she had a total meltdown.

My fears became irrational and magnified on several levels.

I immediately took to emailing her classmates’ parents in the hopes of creating a way, ANY way, to have our kiddos talk to each other. After sending the first email out, it occurred to me that not every autistic kid is like mine; because, spectrum right!?

I also couldn’t assume that every parent’s situation was the same. So, depending on their work schedules, ability to communicate during the day, or tech savvy-ness, or even having access to the same technology as us or each other, I figured I had to be crafty. I sent a follow-up email and proposed every imaginable way to communicate. I listed my email, cell phone, all of my social media handles, every app under the sun, and even offered to communicate via snail mail. Whatever they needed for their kiddos to be able to stay in touch with my kid, I was all about it. Zoom, FaceTime, Duo, Hangouts, etc. You name it, I was willing to make it work.

At first, we only heard from one of the parents. Her child, before all of this social distancing, had already been intimidated by Penny’s style of socializing. This made me realize that Penny’s way of communicating is SO different than Kate’s (her friend) along with all of her other classmates on the spectrum. 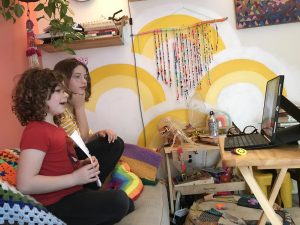 Penny loves the social connection she gets through video chatting with friends.

Just to give you a little background on my kid: Penny needs (emphasis on needs) to make eye contact, craves smiles with social praise, loves intense pressure, hugs, or any deep tissue sensory things that involve squeezing, getting in the dirt, textures, and tactile, sensory play. She also enjoys super low whispering with eye contact, running and eating together as friends, togetherness all around. Which is not usual for an autistic kid, at all. She is consistently trying very hard to be verbally social, only needing help now and then on how-to. Overall I’d describe her as pretty aggressively social, even more so than a neurotypical kid, while simultaneously missing chunks in her verbalization ability.

Her friend, Kate, whose autism communication style is mega shy, finds Penny to be too intense and confrontational (which Penny can totally be). This comes through as mean. Autism aside, Penny is still a kid and capable of being mean. So, how do we help them communicate? Her mom and I came up with a system to start out. We decided on having the kids send each other little videos saying hello, and sending a letter in the mail addressed to Kate from Penny. This way, because Kate knew they were not livestreaming, it didn’t feel like confrontational conversations but rather small little hellos to watch or read/listen to at her pace. We are hoping we’ll be able to build Kate’s ability to have a live video chat eventually. This is Kate’s style of communication.

After Kate’s mother reached out, I was able to connect with another parent from Penny’s class.

Her buddy Marlon’s mom reached out! Excitement all around.

Penny’s IEP/learning model is set up to be an integrated classroom. This means that each member of her core group, all kids with autism, gets paired up with a buddy and they go together into a neurotypical kindergarten classroom setting each day during the week. Marlon is Penny’s buddy. Marlon’s mother reached out at first through email, then text, and we soon pieced together just how important Marlon and Penny’s friendship was. They were very close in school.

Social. Interaction. I’m speaking to you, parents who feel the weight and importance of a few months of not having that peer social interaction for your kids. I felt it right here.

The importance of this relationship in my daughter’s life… This is something I would not have discovered, I think, unless we, as two separate families, hadn’t needed to reach out to each other.

His mother, also proactive in creating an open way for her son to socialize, was all about having them “talk.” For Marlon, this meant having FaceTime chats. In the beginning of their calls, he was able talk with video chatting with a side glance stance and talking “through” some little toy characters. Eventually, towards the end of the call, he is able to talk directly to Penny. This is Marlon’s style of communicating. 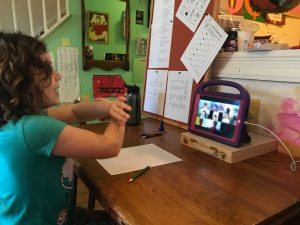 Penny and her classmates connect via video conference calls to continue schoolwork at home.

The moment he heard Penny say hello he was able to engage in the conversation. Penny truly needed and missed her friend. Through his very calm and collected style of talking, Marlon revealed he needed the interaction just as much.

During this time, it’s important to be empathetic, open, crafty, and to work as a team to use assistive technology to provide the method of communicating that works for you. Whether it be low tech snail mail, FaceTime, Zoom calls, etc.

What is important to me is finding my child, in ANY way, a format of communicating that fits her and her friends’ styles of socializing. I want to facilitate that, while (as a perk!) also making my fellow parents feel connected and learning new facets of our kids’ friendships.

This technology has given me a priceless glimpse at something I may have missed out on otherwise. A silver lining of this whole quarantine thing. From here, because of Zoom, FaceTime, snail mail, whatever kind of assistive technology, I’m feeling better about how Penny and her friends will continue and build on their friendship.

Is there some kind of assistive technology that would help you stay connected or learn/work from home right now? PATF can help you locate possible funding resources, or provide a low- or no-interest loan so you can buy the technology you need yourself. We don’t charge any fees for our services, and we’d love to help! Contact us for more information or visit our financial loans page.

Assistive Technology (AT) to Keep You Active in the Garden