We’re excited to announce a new project we’re embarking on here at PATF: Smart Homes Made Simple. Earlier this year, we received a generic technology grant from the Pennsylvania Developmental Disabilities Council (PADDC). And thus, Smart Homes Made Simple was born, a project that will raise awareness about how people with disabilities can gain control over their environment and live safely and more independently in their own homes using generic smart home technology. To carry out this project, PATF has assembled a consumer-controlled Advisory Committee and brought in a technology consultant, Kirby Smith of SunKirb Ideas, so that we can learn about this technology and spread our knowledge to those who can benefit from it.

The target groups for this project will be individuals with developmental disabilities who have significant support needs and who are transitioning to the community, as well as young adults who are moving into homes of their own. The project will focus on enabling these individuals to live independently in homes integrated with generic smart home technology. This project will directly serve individuals who are low-income and who live in Southeastern Pennsylvania, primarily Philadelphia. However, the information that is gathered by the Advisory Committee and learned from the consulting partner’s installs of 20 new smart homes each year will be disseminated throughout the Commonwealth. 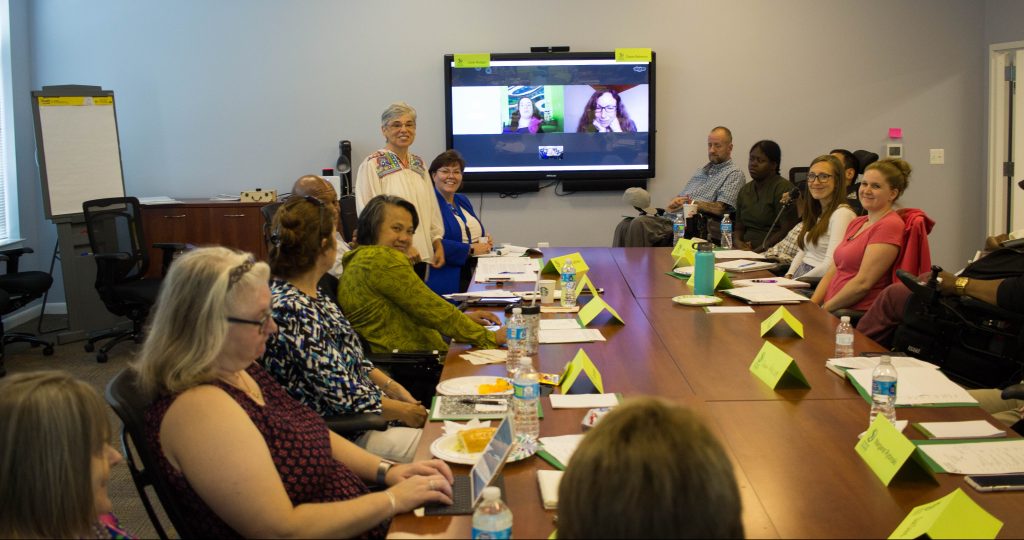 Two members video conference in for the first Smart Homes Made Simple advisory committee meeting at Inglis in Philadelphia.

On August 28th, we had our very first Advisory Committee meeting where 24 of us gathered at Inglis in Philadelphia, with a few remote members phoning in using Skype, projected on a large screen.

We began by asking everyone to name their current favorite piece of technology, and we got quite a variety of answers. While some listed such commonplace devices as a garage door opener and a digital camera, others cited more cutting edge technology, like the new app Sesame Enable for voice text and the latest Apple Watch. And the reasons cited were just as varied: one person’s Xbox was for watching Game of Thrones, while the Apple Watch once saved someone’s life. iPhone’s VoiceOver gives a woman who is blind access to nearly everything on her phone, and someone’s Fitbit tracks their sleeping habits. This exercise provided a glimpse at how just a few people might have a great variety of wants and needs from the technology in their lives, of both the “smart” and not-so-smart varieties.

Lucky for us, our preliminary research on generic smart home technology suggests that the possibilities available using this tech are nearly endless! Here are a few examples: 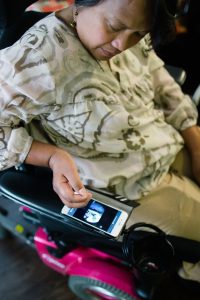 Suria checks who’s at the front door from an app on her smart phone in her bedroom.

Suria has a spinal cord injury and uses her Amazon Echo to create a shopping list with her voice at home that her husband can access from an app on his smart phone while he’s out running errands. They use Nest to see and speak to each other from different floors of their home, and to see who’s on the sidewalk in front of their home.

Michael has cerebral palsy and uses his Amazon Echo to control his music, and to tell him jokes. He uses Sesame on his Android to voice text because the software is better equipped to recognize what he’s saying.

Katie is Deaf and installed a smart doorbell that sends an alert to her phone with a video feed when someone comes to her apartment door.

Seth is a veteran and has PTSD. He worries about intruders in his home. Using If This Then That (IFTTT) technology, his downstairs smart lights are turned on automatically when he enters his code in his smart lock at the garage door. He also uses Nest cameras to check the exterior perimeter of the house on his smart phone when he’s not home.

While mainstream use of such technology is gaining ground, the application of these devices in the disability community as assistive technology (AT) is lagging, with many people still dishing out thousands and tens of thousands of dollars for older, specialized AT.

Our goal is to learn about, define, and raise awareness of what this amazing and often more affordable tech can do for people of all abilities.

SmartHomesMadeSimple.org will feature stories about how generic smart home technology is being applied in the lives of real people, informational articles about this new technology, video demonstrations of how to use it, and more. Be sure to follow @SmartHomesMadeSimple on Facebook, @MySmartHomeTech on Twitter, and @SmartHomes_MadeSimple on Instagram. Help us spread the word about the amazing ways people with disabilities are using generic smart home technology by using the hashtag #MySmartHome!

Learn more about how PATF can help you find funding for the smart home technology you want by contacting us.