Reflections on a Week of Assistive Technology in Costa Rica

Written by Sandra Masayko, Director of Assistive Technology at Easterseals of Southeastern Pennsylvania

Almost a year ago, Susan Tachau and I were invited by Connie Del Rosario Zúñiga, a teacher we know in Ciudad Quesada, Costa Rica to come to Costa Rica to share information about assistive technology (AT) (including communication devices) and our perspectives of the world of disability. The school, Centro de Educación Especial de San Carlos Amanda Álvarez de Ugalde, is in an agricultural region a couple of hours north of San Jose and serves children with disabilities including cerebral palsy, intellectual disabilities, and sensory disabilities. After many email exchanges and with the help of Google Translate, we set off for Costa Rica at the end of October and spent a week working at the school, followed by a week of touring in the country. 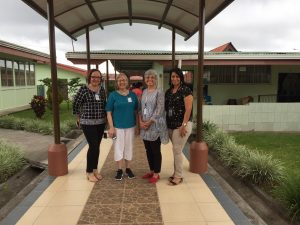 Sandra and Susan (center) pose with Rita (left) the Principal and Gabby (right) an educator of teachers at the Ministry of Education.

“No tenemos nada (we have nothing),” our contact had informed us by email. Based on Susan’s experience as Executive Director of Pennsylvania Assistive Technology Foundation (PATF) and as a parent of a man with a disability, and my experience as Director of Assistive Technology at Easterseals of SE PA, we planned to share our knowledge of adaptations for disabilities and to learn from the professionals, parents and students at the school. Susan decided to focus on how she helped her son prepare for independence and work, and to discuss mechanisms for acquiring AT (including microfinancing). She brought handouts in Spanish, books, and financial education materials. And, based on my experience with AT for a variety of students, I decided to concentrate on using switches to activate toys and appliances, adapting books and adapting toys. For this reason, I packed two suitcases with adapted puzzles and books to leave with the school as samples, and I included a Power Link, switches and battery interrupters that I purchased on EBay. In addition, I brought some battery-operated toys to use with switches and Spanish language Handwriting Without Tears materials. Both of us brought PowerPoint presentations to share. 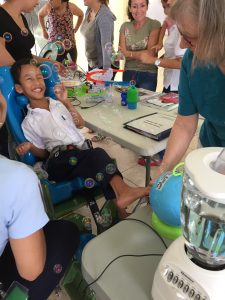 For the first time in his life, a boy controls a toy that blows bubbles using a switch he activates with his foot.

To our surprise and theirs, the school had more resources than they knew. Once I showed the teachers the technology that I brought from the states, they began pulling out boxes. It seemed that they had a lot of equipment that had been put away in boxes by previous employees, but current employees did not know what those things were. The teachers had speech-generating devices, Power Links, switches and other things, and although these items were over 15 years old, most could still function. This is a great example of how assistive technology consists of both devices and services.

Without services or support, technology can be useless.

We spent time observing in classrooms, setting up technology (and Susan even watched a couple of YouTube videos so that she could learn how to put together a battery operated toy – penguins climbing a tower and going down a slide – that could be activated by a switch!), and trying out adaptations with children and teachers.  The response was positive and teachers asked many, many good questions. It was very exciting to see students play independently with toys for the first time!  Some of the students learned very quickly how they could operate the switches and were game to play with as many toys as possible! One boy appeared delighted as he used his foot to activate the bubble machine. 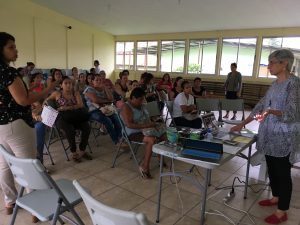 Susan speaks to a group of parents about dreaming for the future and how assistive technology can help make things possible.

A highlight for us was making a presentation, with translation by a specialist from the Ministry of Education, to 28 parents and the school’s occupational therapist and speech pathologist! Cultural differences were evident in some questions, such as when one parent asked Susan, “Why doesn’t your son live with you?” Susan challenged parents to incorporate decision-making beyond “yes” and “no” to include “want” and “need”. We noted less emphasis on books than we have in our culture, but people were interested in seeing adapted books. Another cultural difference is that some children with disabilities attend school only part-time or sometimes just once a week because they live so far away – as much as two plus hours away. We also learned that parents stay at the school during the day to help their child with all self-care activities (toileting, eating, and the like).

Susan and I were involved in different activities our last day at the school. Susan accompanied Connie on a home visit to a teenager who spends all of her time in bed. Because she brought a language board with pictures of the body, Susan was able to show Connie how this girl could communicate pain using the language board. Susan also had ideas as to how AT could help with new positioning (including creating a wedge made out of cardboard.) 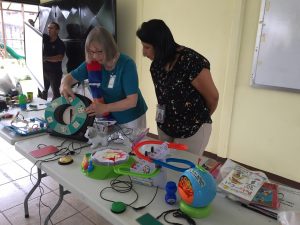 Sandra shows teachers a variety of assistive technology devices and how to make toys accessible.

I did a demonstration to small groups of teachers to show them how to use the toys and adaptations we had set up. Veronica, an occupational therapist who had attended the earlier presentation with the parents, listened and translated. After hearing and translating my presentation to the teachers one or two times, Veronica took over the presentation and my job as a consultant was over! This is exactly how I had hoped this would end.

We completed our collaboration and changed our role to tourists. Costa Rica is an amazing country with friendly, tolerant, intelligent people and an emphasis on family. Volunteering gave us personal perspectives on this stunningly beautiful place and we believe we gave our contacts at the school different perspectives on adaptations and disabilities to be able to consider challenges in new ways. Pura Vida! Pure life! That is the Costa Rican motto. Our trip certainly enriched our lives.

Learn more about how PATF can help you get the assistive technology you want and need.